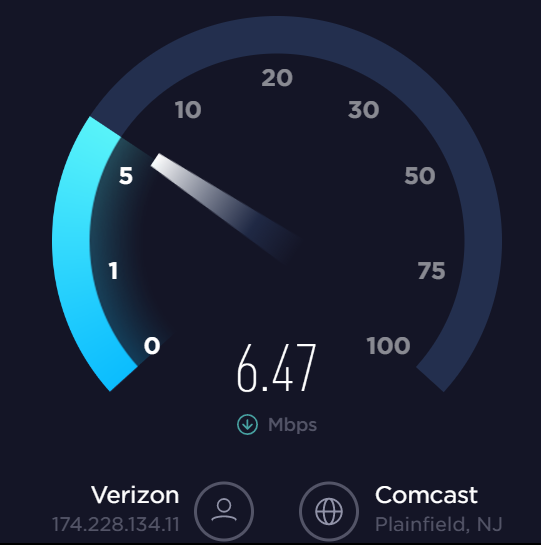 We use the Internet extensively when we travel.  Many of the things I do require a high-speed connection: searches, uploads of images and video content, downloads of reference materials, email with big attachments, and updates to the software. All too often the local Internet connection is shared and congested or capped at a very low speed.

Marguerite and I both have smartphones on the Verizon network.  Since Verizon allows us to adjust our shared data limits from month to month we have bridged the intervals of poor local Internet access by using the personal hotspot feature on the phone.  We buy the gigabytes of data we need. This can be expensive when Microsoft publishes a security update, or we have projects that hog data.  It’s usually out of the question for streaming video.

When Verizon announced its “Unlimited” data plan it sounded perfect.  Stream whatever you want, the ads promised.

Initially, it worked great, although it didn’t seem as fast as the metered connection we had before. But something went wrong with the Microsoft Office suite on my laptop and I had to reinstall the programs – think gigabytes of data. Heck, I thought, we have unlimited data. No worries here, I’ll just start the installation before we go to dinner and all will be well. When we got back, the message on the screen said, “You seem to have a slow connection. This may take a while.” It also showed a progress bar at about 15% – not so good – but the little wheel kept spinning, so I left it alone and used my iPad to do other work. The process continued into the night and by morning it was done.

But all was not well with our internet connection.  In fact, it was as slow and erratic as the congested local wifi connections. Puzzling. The phone had good signal: five out of five bars.  The service was “LTE” meaning that the data performance should be superior.

It turns out “unlimited” does not mean unmetered.  A bit of online research revealed that there is a dirty little secret behind the unlimited claim. Technically if nobody else wanted to use the service it would be unlimited for me as a sole user.  But the system gives priority to those whose usage is more modest – they go to the front of the line during periods of congestion. So my massive download of the Microsoft Suite probably put me dead last in line for the rest of the billing period.

The prospect of another week of the dismally slow Internet was not good news. My benchmark for acceptable service is consistent speed of at least two mbps download and one mbps upload. My present Verizon service was typically 0.04 mbps. I have some high-tech tools for measuring performance, and I could see all the symptoms of a highly congested channel and I just wasn’t getting through the higher priority traffic. Earlier, before my big download, the speed was a spritely 4 mbps download and 2 mbps upload.

I called Verizon customer service to ask why my unlimited was so, well, limited. The pleasant woman who took my call apologized and said it was just a matter of local congestion and denied that I was being penalized for over-use. When I said that I had found articles on the internet that exposed the deception, she began to talk very fast. And when I said I was going to replace my Verizon service with AT&T she started to negotiate.

I ended up switching from the unlimited plan to a metered plan. Magically my data speed jumped back to the 4 mbps level. Did the alleged “congestion” go away? Not likely.  On a metered plan, it is in the Verizon company interest to have customers use data freely – and fast. I’m back at the head of the line again.