Most of us at Pennswood Village are lifetime witnesses to the explosive development of communications technology. When I was seven, my family didn’t have a TV set. It was a special treat when I was taken up the street to a neighbor’s house to watch Buffalo Bob and Howdy Doodie on a seven-inch black and white television. Blurry though the picture was, we were thrilled to sit on the floor munching cookies and sipping milk for that special half-hour.

Our house did have a phone.  It sat on the “telephone table” in the hall at the foot of the stairs – one instrument for the household. A single pair of copper wires 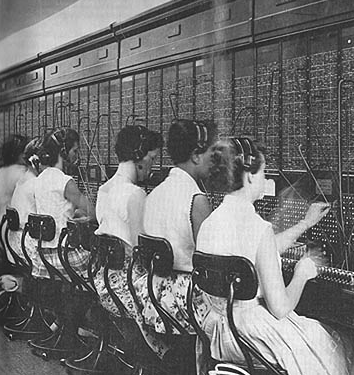 ran from that phone to a pole on the street and all the way downtown to the central office. There, telephone operators used switchboards to direct calls to other local subscribers, or to long-distance operators.

Over time, technical innovations allowed a single pair of copper wires can carry up to six simultaneous conversations, or a combination of voice and data. The clarity of the voice connection and the amount of data was diminished the further a subscriber lived from the central office. Bandwidth – the amount and speed of information transfer – was restricted by the inherent limitations of twisted pairs of copper wires.

The popularity of television entertainment made cable television networks attractive investments despite the high cost of building them. Unlike the twisted copper pair, a coaxial cable carries thousands of simultaneous streams of information: not just voice, but television and data as well.  But cable also has inherent limits to the amount of information it can handle. Plus, it is better suited to delivering broadcast data to a large audience than it is to handling individual two-way communications.

Solid-state technology combined with digital networking overcame some of the limits of coaxial cables and made possible cable telephone service, movies on demand, and hundreds of channels of high definition TV. But the demand for these services today has reached the bandwidth limitations of coaxial cable. When the cable movie you are watching stalls, the cable internet is slow, or your cable phone drops out it’s usually because the cable network is maxed out. Like a highway at rush hour, congestion slows the flow of traffic.

Superior capacity (bandwidth) is why fiber optic cable is better to have than coaxial cable. In addition, fiber offers reliability, long service life, and immunity to electromagnetic interference.  America’s cable network infrastructure is aging. Corrosion, deferred maintenance, and poor workmanship have degraded service in many areas.  Fiber optic networks are to cable like new interstate highways are to aging conventional highways.

Our need for speed and capacity continues to grow. Bigger TVs with sharper pictures are coming. 3D and holographic TV are experimental. Scheduled broadcasting to many viewers is being supplanted by individual on-demand programming.  Audiences are being segmented to target focused personal interests.

The demand for fast reliable two-way internet grows as YouTube and Facebook include streaming of live images. The tools to make presentations, movies, animations, and games are affordable for hobbyists and the Internet is both forum and marketplace.

For business and volunteer groups, interactive meetings and seminars are now affordable. Schools and colleges use the Internet for submission of homework, publishing of class materials, grades, and test results. Many people work from home all or part of the week relying on the Internet to stay current with their colleagues.

Having the advantages of fiber optic service will continue to grow in importance for present and future Pennswood residents. I can scarcely believe that in my lifetime we progressed from the telephone operator saying “number please” to technology that lets my wife watch daily color video images of our infant granddaughter. Why she can even call Key West to coo at her “live” on the wireless phone she carries in her purse. Verizon FiOS will let us continue to enjoy the ride in style.